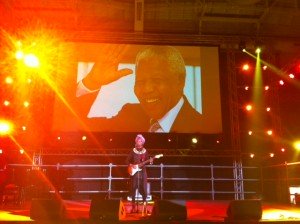 They aimed at a full house and a full house it was at the Women’s Circle 2013 with over one thousand people attending the Italian Oxfam fundraiser Thursday, 5 December at the old ice skating rink in Milan.  It was a big success thanks to the many stars attending the event beginning  with Ferrari which enriched the evening.  Oxfam is a large international network of organizations which work to combat poverty and injustice.  The group is very active in Italy and last night’s event was dedicated to raising money for their causes.  The  evening proved to be a non-stop exhibition of famous people like Patti Smith and Fatoumata Diawara, dj’s Nicola Zucchi and Graziano Della Nebbia, and let’s not forget Luca Bizzarri and Paolo Kessisoglu the auctioneers for the evening.  Ilaria D’amico, the ambassador of Oxfam Italy and Enrico Bertolino, as hosts, were also there to lend their stardom to the occasion. 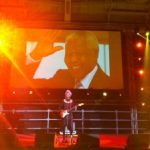