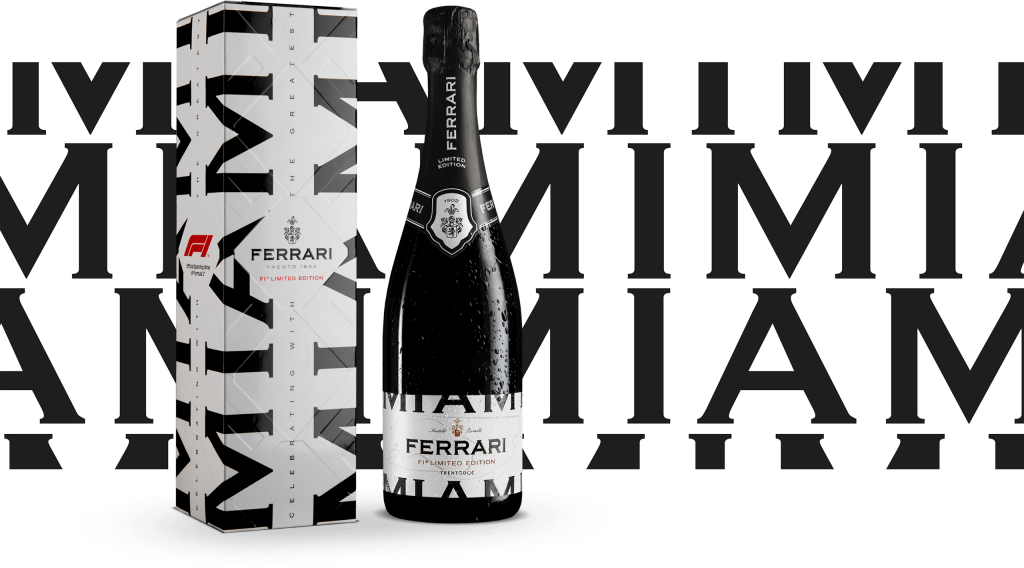 There are plenty of reasons why the 2022 Formula 1® season promises to be particularly exciting. Ferrari Trento, which is involved in it in a leading role as the Official Toast for the second consecutive year, is making its own contribution with some novelties that will allow enthusiasts to experience personally the emotions of the foremost series of events in motor racing.

After starting the season by offering an extraordinary opportunity to take home some special bottles autographed by the winning drivers – thanks to a series of charity auctions on the F1® Authentics platform – the winery in the Gruppo Lunelli has now added two new labels to its Ferrari F1® Limited Edition collection.

This cuvée, launched last year in four different versions that pay homage to four of the iconic Grand Prix™ races, has been warmly welcomed all over the world, and is in fact going to add two new bottles this year. The first will be dedicated to the circuit in Miami, the highly awaited new entry in the championship, which promises to be spectacular both on and off the track. Due to take place from 6th to 8th May, tickets for the new Grand Prix™ have already been sold out for months. The second new label, on the other hand, refers to the circuit in Mexico City which, as it is situated at 2,200 meters (7,200 ft) above sea level, allows the cars to attain even higher speeds and so offer exceptionally exciting performances.

The two bottles, like the previous Ferrari F1® Limited Editions, are Blanc de Blancs cuvées resulting from the Trento-based producer’s more than one hundred years of experience as well as the extraordinary vocation of the mountains of Trentino for creating sparkling wines of great elegance. Matured on their lees for 38 months, these Trentodoc wines display a highly intense nose with notes of ripe fruit, in which one also finds hints of crusty bread and hazelnuts; the flavour on the palate is inviting and satisfying, thanks to the wine’s freshness and the finesse of its perlage, with a finish that combines mineral sensations and citrusy nuances.

With each bottle bearing the circuit image on the lable and packaged in a customized gift box with an attractive design, the Ferrari F1® Limited Editions dedicated to Miami and Mexico City will be available in limited quantities – starting from the month of April – from top wine stores and online, as well as at the Ferrari winery (for info: enoteca@gruppolunelli.it, tel. +39 0461 972331). Enthusiasts all over the world will therefore be able to complete their collections and drink a toast to the newly started season, which promises to be a truly sparkling one.