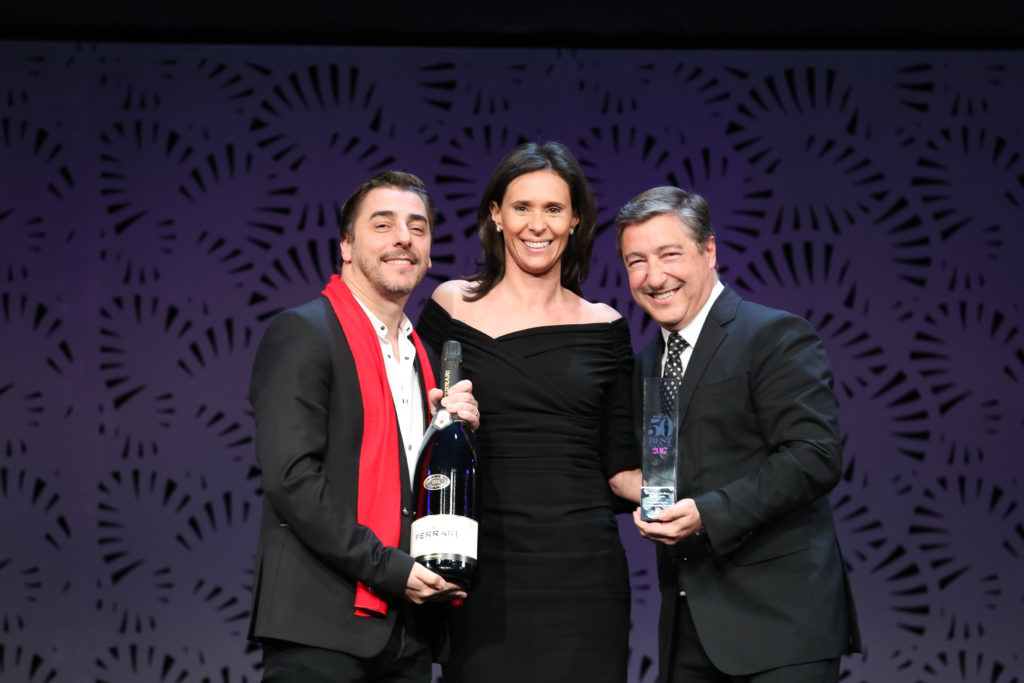 El Celler de Can Roca conquers the second edition of the “Ferrari Trento Art of Hospitality Award”, the prize established in 2016 by Ferrari Trento in partnership with The World’s 50 Best Restaurants.

Eleven Madison Park, the New York restaurant that won the Art of Hospitality Award in 2016, has conquered the title of “World’s Best Restaurant”, climbing to the top of the 2017 ranking.

The prominent panel composed of almost 1,000 chefs, cuisine experts, and cuisine lovers who drew this year’s The World’s 50 Best Restaurants’ ranking has come to the conclusion that not only is El Celler de Can Roca the third-best restaurant in the world, but also it has best interpreted the magical chemistry created by the interlink of service, location, and hospitality, conquering the “Ferrari Trento Art of Hospitality Award”.

This amazing restaurant located just outside of Girona, in Spain, is managed since 1986 by three brothers of the Roca family: Joan, the chef, Joseph, the sommelier, and Jordi, the pastry chef. For several years, their restaurant has been on the podium of The Worlds 50 Best Restaurants ranking, conquering the first place in 2013 and 2015. Their approach is based on the idea of “seducing” their guests, by offering them an experience where the kitchen and the dining room mutually reinforce each other. According to the Rocas, it is the dining room that ensures the cohesion of the restaurant, creating a web of emotions and turning into “a sturdy and generous wine that never gets too old and always reinvents itself, one that gets better with age”.

The award was handed over by Camilla Lunelli, Communication Director of Ferrari Trento, during the prize-giving ceremony of the  ranking of The World’s 50 Best Restaurants 2017 held on April 5 at the Royal Exhibition Center in Melbourne.

This exciting achievement was celebrated by more than 900 people, including some of the most influential personalities of the international restaurant industry, who raised glasses of Ferrari Trentodoc in honour of these great restaurants.

The “Ferrari Trento Art of Hospitality Award” 2017 represents yet another step in the strategy of Ferrari Trento to focus on the topic of hospitality, an endeavour launched more than one year ago and aimed at enhancing the role played by the dining room in the high-end restaurant industry. After all, the maître, the sommelier and the waiting staff are the ones who can turn a gourmet experience into something truly unforgettable.

The choice to award a prize for such an intangible, yet seminal factor to the success of a restaurant is fully in line with the values and the style embodied by Ferrari Trento. A toast is a symbol of conviviality, and Ferrari stands for a lifestyle centred around the joy of sharing, where hospitality is a crucial value for the whole culinary experience. The best ambassador of high-end wines and the environment of choice to experiment, get to know and tell the story of Trentodoc Ferrari has always been the haute cuisine.

In wine making, excellence is nothing but the result of countless small gestures full of attention, passion and care, from the vineyard to the winery. A restaurant is no different: excellence comes as a result of plenty of details that go beyond a single dish or the kitchen. The “Ferrari Trento Art of Hospitality Award” has once again been awarded to a restaurant that was able to set itself apart from the competition thanks to the harmony created between the service and the kitchen, thus becoming an inspiration for others.